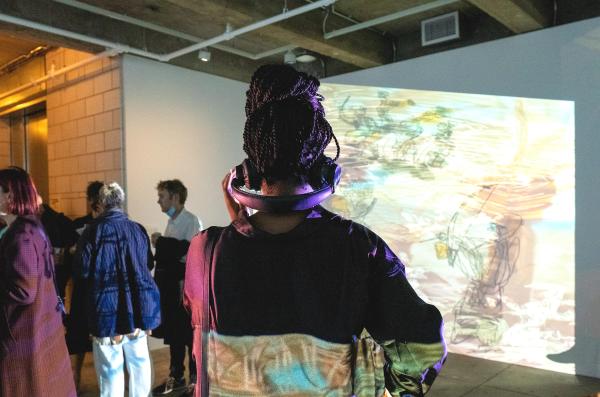 Inspired by Neo Muyanga’s “A Maze in Grace” installation in the exhibition A Mass of Cyborgs, this dialogue will highlight stories and storytellers of Black Liverpool and Black New York, forging connections between people and places central to the history of enslavement and resistance to it. Jacqueline Nassy Brown is an anthropologist at CUNY, and Kamau Ware is an artist, historian, and creator of the Black Gotham Experience.

This exchange is part of a series of programs at CARA inviting artists, scholars, and thinkers to present their work, in dialogue with A Mass of Cyborgs, on view at CARA until March 5, 2023.

Jacqueline Nassy Brown is Associate Professor of Anthropology at Hunter College and the CUNY Graduate Center. Her work treats place and other geographical phenomena as lenses through which to understand contemporary formations of race and nation. She also contributes to diaspora theory, feminist geography, and the anthropology of Black Europe. She is the author of Dropping Anchor, Setting Sail: Geographies of Race in Black Liverpool (Princeton, 2005), which deploys ethnographic research to show the inextricable relationship between racial politics in Liverpool on the one hand, and the politics of place in Britain writ large on the other hand. It also argues for treating the local and the global not merely as spatial categories but as profoundly racialized ones, while also offering a feminist critique of the Black Atlantic paradigm. Some of Dr. Brown’s courses include The Anthropology of Black America, Cultural Diversity in the U.S. (a.k.a. Racialization and Resistance in the U.S.), and The Anthropology of Race. Her current book project examines the politics of New York City exceptionalism, or the view that the city is totally unique within the U.S., addressing questions like: How is the category of the New Yorker culturally constructed? What role does race play in these dynamics and how do these politics play out in everyday life?

Kamau Ware is an artist and historian best known for his flagship storytelling project, Black Gotham Experience (BGX), a visual storytelling project founded in 2010 that celebrates the impact of the African Diaspora on New York City through a series of walking tours and graphic novels. BGX has been in residence in the Seaport District of Lower Manhattan since 2017, serving as a gallery, event space, and visitor’s center for walks, and has been recognized by The Atlantic, The New York Times, Atlas Obscura, and Columbia University’s History in Action Project Award, among others. In 2021, Kamau led a successful movement to have July 13th officially recognized by the Borough of Manhattan and the 27th District of New York State as “Black Vision Day”. He has also worked with Community Board 2 of Manhattan to pass resolutions to mark land owned by Black people in the mid 17th century known as Land of the Blacks. Kamau has been commissioned by the Lower Manhattan Cultural Council, the Apollo Theater, the Mile Long Opera, the New York City Public Design Commission, and The Shed, and has spoken at the New York Historical Society, the Public Theater, SXSW, Yale University, and the Municipal Archive in Amsterdam. He has developed classes, tours, and workshops for NYU, Columbia University, the New School, and K-12 schools across New York City.