Neo Muyanga: A Mass of Cyborgs 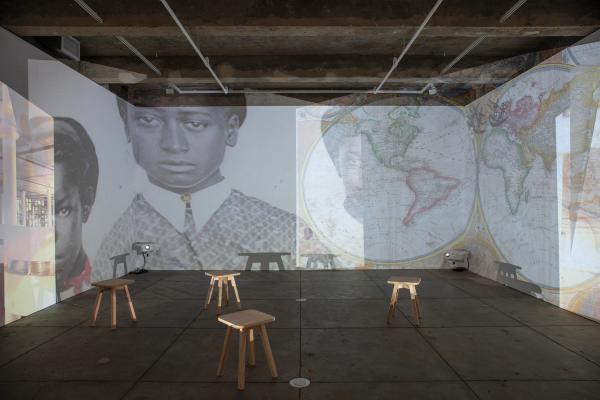 A Mass of Cyborgs, the first solo exhibition by South African artist and composer Neo Muyanga. The exhibition gathers recent and older works, deepening Muyanga’s exploration of how protest songs, sound, and voice can invoke memory, radiate empowerment, and be deployed as tools to prompt radical action. Muyanga’s work uncovers and animates long-standing archives of music and idiomatic song that ring out against the endless transformations of infrastructural oppression, preserving understandings of sound as both a vital form of knowledge, and as a measure of history.

For this exhibition, the artist draws on philosopher and critical theorist Achille Mbembe’s ‘necropolitics'—the politics of life and death—investigating how the State determines not only the conditions of a populations' existence, but also exercises the sovereign “power to kill, to let live, or to expose to death.” Necropolitics is deployed through “small doses” of death which shape and run through daily life; such as surveillance, harassment, the absence of basic social provisions, and the overarching military, and economic devices driving the persecution and elimination of certain human populations.

A Mass of Cyborgs moves through voice, fiction, and allegory to interrogate the violent enforcement of these conditions and the liminal spaces between life and death that they generate. It asks how biometric technologies have expanded conceptions of what constitutes a border, and how certain territories are rendered boundaries and uncrossable through this process. How might human beings locate and relate to one another through a recognition of our shared vulnerability and porousness, rather than seeing in the Other the specter of self-ruin? How could we encounter the Other not solely as a subject conditioned by such violence, but as a being with whom to build a more just world?

The protagonists in A Mass of Cyborgs are hybrid, marginal figures drawn from centuries of literature emerging from the African Postcolony—historically recurring exiles, jesters, and outsiders are reanimated here as part-cyborg entities of the twenty-first century. While the characters assimilate many algorithmic technologies of violence defining their territory, they must also attend to the preservation of chance as a force for generating reciprocity, contingency, and solidarity.

Neo Muyanga: A Mass of Cyborgs is curated by Executive Director Manuela Moscoso.

Neo Muyanga (b. Soweto, South Africa) is a composer and artist whose work uncovers the many interwoven sounds comprising the history of protest song within the Pan-African and diasporic contexts. Muyanga’s practice seeks to foster and preserve love and appreciation, and to develop memories and knowledges that have been variously erased, obscured, or violently debarred by dominant global powers throughout history. Blending new opera, jazz improvisation, Zulu, and Sesotho idiomatic songs, Muyanga’s sonic interventions are nourished by their attention to communal storytelling, reciprocity, and interdependence. A co-founder of the duo Blk Sonshine alongside Masauko Chipembere, he also created the Pan African Space Station (2008) with Ntone Edjabe – a platform for experimental Pan African music on the internet. He has released eight albums, including “Second-hand Reading with William Kentridge” (2016), “MAKEbdA” (2019) which was a featured sound installation during the Sharjah Biennial, UAE (2019), “A Grace Project” (2021) is commissioned by Liverpool Biennial 2021, and released in collaboration with SAVVY records.

How might human beings locate and relate to one another through a recognition of our shared vulnerability and porousness, rather than seeing in the Other the specter of self-ruin?

How could we encounter the Other not solely as a subject conditioned by such violence, but as a being with whom to build a more just world?

Commissioned by CARA, Hymn to the Strange, is a collaborative project with The Unsung—a community-based music collective devoted to celebrating stories of the Black experience weaving through generations and timescales as a Greek chorus might. Read more here.

Walk-ins are welcome. Reservations are encouraged.