A Rock, A River, A Street by Steffani Jemison 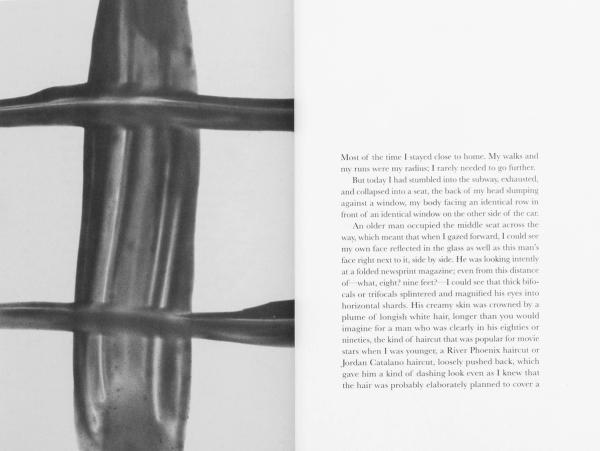 A Rock, A River, A Street by Steffani Jemison
with readings by Jemison, Thomas Jean Lax, and Simone White

Please join Primary Information and CARA for a reading and discussion to celebrate the release of Steffani Jemison’s book, A Rock, A River, A Street, with Thomas Jean Lax and Simone White.

In October 2022, Primary Information released Steffani Jemison’s novella, A Rock, A River, A Street.  Moving deftly across narrative genres and styles as she interrogates the boundedness of the self, the possibilities of plurality, and the limits of performance, Jemison’s book follows a young Black woman who lives at the hazy border between Brooklyn and Queens in the not-so-distant present. As she rides the subway, walks around her neighborhood, visits the doctor, watches movies, attends dance class, and tries to heal her body, she recalls formative experiences from her childhood and absorbs the world around her; in the process, we are brought into her conflicted relationship with language. Acutely conscious of the soft, responsive nature of her physical self, and pushed and pulled by forces she cannot control, the narrator is vulnerable, terrifyingly open. Jemison’s writing asks, Where does your body end and the world begin? How do you locate the limit between yourself and others?

Doors will open at 6:30pm and attendance is on a first-come basis. The conversation will begin promptly at 7:00pm and is free. CARA is located at 225 West 13th Street. Books will be on hand for purchase.

Thomas Jean Lax is a curator, writer, and scholar specializing in black art and performance. At the Museum of Modern Art, they co-organized the exhibition Just Above Midtown: 1974 to the Present (2022) with Lilia Rocio Taboada in collaboration with JAM’s founder Linda Goode Bryant. In 2019, they worked with colleagues across MoMA on a major rehang of its collection and co-organized the exhibition Judson Dance Theater: The Work is Never Done (2018) with Ana Janevski and Martha Joseph. Their other collaboratively organized exhibitions include the Projects Series for emerging artists; Unfinished Conversations, inspired by the cultural theorist Stuart Hall; the contemporary art quintennial, Greater New York; and commissions with artists including Neïl Beloufa, Maria Hassabi, and Steffani Jemison. Previously, they worked at The Studio Museum in Harlem for seven years, where they organized When the Stars Begin to Fall: Imagination and the American South and participated in the landmark “f show” contemporary art series.

Simone White is the author of or, on being the other woman (Duke University Press, 2022), Dear Angel of Death (Ugly Duckling Presse, 2018), Of Being Dispersed (Futurepoem, 2016), and House Envy of All the World (Factory School, 2010); the poetry chapbook, Unrest (Ugly Duckling Presse, 2013); and the collaborative poem/painting chapbook, Dolly (with Kim Thomas) (Q Ave, 2008). Her poetry and prose have been featured in Artforum, e-flux, Harper’s Magazine, BOMB Magazine, Chicago Review, The New York Times Book Review, and Harriet: The Blog. Her honors include a 2021 Creative Capital Award, a 2017 Whiting Award in Poetry, Cave Canem Foundation fellowships, and recognition as a New American Poet for the Poetry Society of America in 2013. She is the Stephen M. Gorn Family Assistant Professor of English at the University of Pennsylvania and serves on the writing faculty of the Milton Avery Graduate School of the Arts at Bard College. She lives in Brooklyn.

Primary Information is a non-profit organization founded in 2006 to publish artists’ books and writings. The organization’s programming advances the often-intertwined relationship between artists’ books and arts’ activism, creating a platform for historically marginalized artistic communities and practices. Primary Information facilitates intergenerational dialogue through the simultaneous publication of new and archival books, providing a new audience for out-of-print works and historical context for contemporary artists.