Hymn to the Strange / Ongoing Rehearsal 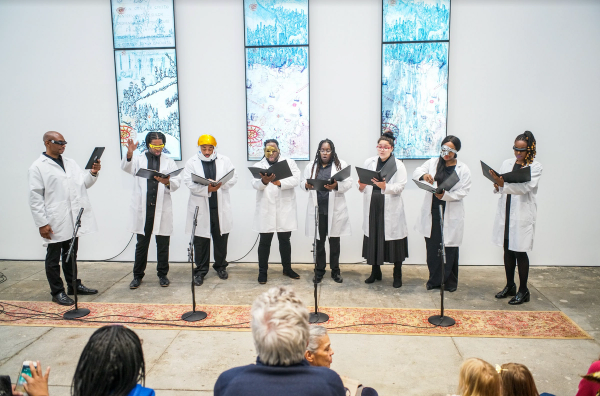 Hymn to the Strange is a live choral act performing revolt songs in Zulu — recomposed by Neo Muyanga and sung by 8 members of The Unsung. The bi-weekly live rehearsals will vary and transform over the course of the exhibition, through a process of continued correspondence between The Unsung and Muyanga. The next rehearsals will take place on February 4, 2023, accompanied by a conversation between Salome Asega and Victor Peterson at 3:30pm.

The protagonists in Neo Muyanga's A Mass of Cyborgs are hybrid, marginal figures drawn from centuries of literature emerging from the African Postcolony—historically recurring exiles, jesters, and outsiders are reanimated here as part-cyborg entities of the twenty-first century. While the characters assimilate many algorithmic technologies of violence defining their territory, they must also attend to the preservation of chance as a force for generating reciprocity, contingency, and solidarity.

In Hymn to the Strange, these shifting figures weave through generations and timescales as a Greek chorus might—collectively narrating both the submission and precarity of their lives and the strength of their resistance amidst such vast, indeterminate, and often unforeseeable forces.

Newly commissioned by CARA, Hymn to the Strange is a collaborative project between South African artist and composer Neo Muyanga with The Unsung—a community-based music collective devoted to celebrating stories of the Black experience, directed by Tyrone Clinton, Jr.

The project includes a sound piece and three live choral rehearsals performed every other Saturday beginning October 1. Ten dates in total from October until March.

About The Unsung Collective

Directed by Tyrone Clinton, The Unsung Collective is a community-based music collective devoted to celebrating stories of the Black experience. Through contemporary music, The Unsung navigates countless stories that are the true fabric of historical and current events. The Unsung is comprised of members from the New York City area, and designed to stretch the confines of music of the Western canon. This ensemble and its members are born of the same community that bears the music by which these stories are told. As a result, The Unsung is dedicated to serving the NYC community through song, educating its audiences, and fostering relationships with those that are willing to listen.

Hymn to the Strange is part of the exhibition A Mass of Cyborgs by Neo Muyanga curated by Manuela Moscoso, Executive Director.

Produced live at CARA’s space, it includes a sound installation, video animations in collaboration with Bianca Turner, and three live choral rehearsal-performances every other Saturday (with several holiday exceptions) through March 2023. The bi-weekly performances will vary and transform over the course of the exhibition, through a process of continued correspondence between The Unsung and Muyanga.

Live choral rehearsal-performances dates for Hymn to the Strange.

Walk-ins are welcome. Reservations are encouraged.